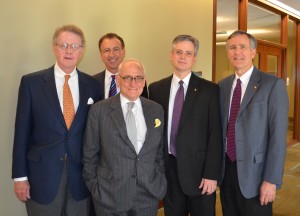 For the past few years, Mackey Mitchell’s attention has been focused on the outcome of the new East Academic Building on Webster University’s campus. The goal was to deliver a highly sustainable building with an emphasis on technology and superior performance. Quoted in the recent  “Structures” section of the St. Louis Business Journal, it was stated that Mackey Mitchell “created an air-tight, thermal building with an insulation layer that resembles a ‘wet-suit’ to keep moisture out…so the building will function more efficiently so heating and cooling systems won’t run as hard.”  A recent engineering analysis revealed that the building would deliver $35,000 in annual energy savings when compared to a similar structure with a standard design.  “That’s a big deal for clients who have buildings open 24/7,” MMA commented. “The payback on that (insulation) system itself is less than five years.”

Designed by Robert A.M. Stern Architects (RAMSA) of New York as a modern interpretation of the Collegiate Gothic style, Mackey Mtchell  served as the Architect-of-Record to guide and oversee the building’s day-to-day progress, making sure all systems, materials, building components and details came together to meet the needs of Webster’s first new home-campus classroom building constructed in nearly 30 years.  Pictured above at far left:  Eugene J. Mackey, III (Mackey Mitchell Architects) and to his left is Kevin Smith (RAMSA); center and in front is Robert A.M. Stern  (RAMSA); and to the far right is Dan Mitchell (Mackey Mitchell Architects).