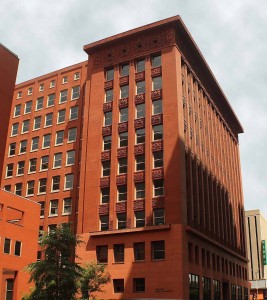 If you happened to catch the news last night on KPLR, Channel 11, you would’ve seen Gene Mackey being interviewed about the Waiwright Building and its architect Louis Sullivan. Gene has become a local authority on the building, having given so many lectures on Sullivan’s architecture to a variety of groups. The Wainwright, which opened in 1892, is famous for being recognized as the nation’s first skyscraper. According to Gene, “Architects around the world come to St. Louis to see two things. They come to see the Gateway Arch and Sullivan’s Wainwright building.” The structure will also be part of a 2013 PBS special titled “10 Buildings that Changed America,” featuring 10 influential American buildings. “The city is home to some monumental architecture,” said Gene, “and sometimes all we need to do is look up to appreciate what makes St. Louis unique.”