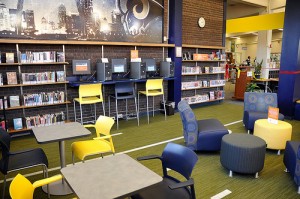 The impetus for designing teen centers began in 2009 as an idea conceived by the St. Louis Co. Library Foundation. Mackey Mitchell has had a hand in the layout and design of three teen spaces for St. Louis Co. Library, the most recent one being the Lewis & Clark Branch. These spaces are designed specifically for young people. According to Jim Bogart, St. Louis County Library Foundation Manager of Development, “Libraries have sort of become a cool place to hangout, socialize and study. With areas devoted only to teens…it makes the space extra special.” Since the St. Louis Rams played a key role in funding the project, the teen center features Rams’ blue and gold colors. Graphics include a mural resembling the wall of the team’s locker room at the Edward Jones Dome, and simulated turf with a fifty-yard line and hash marks. Charter Communications donated the computers.Teens helped in the furniture selection making them feel feel more connected to the space.  Architect and MMA principal Jim Konrad worked on the project along with former employee Rachel Raterman.