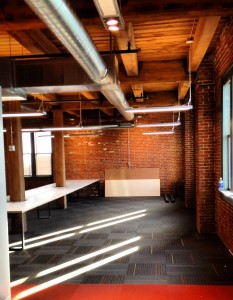 In just a few weeks, Mackey MItchell will be moving to a new home on the fifth floor of the Cupples 9 building across the street from St. Louis Busch Stadium. We’ll have a new address at 900 Spruce Street, St. Louis MO 63102, and a spectacular view of the city.  After a 24-year stint at The Power House near St. Louis Union Station (a project we designed, we’re heading to Cupples Station (buildings we helped save back in 1989).

The new space at Cupples 9 is modern yet maintains the building’s historic character with 12′ ceilings, large windows, exposed brick walls, and massive exposed Douglas Fir columns and beams. Plans are to adopt a new bench-style seating arrangement which will support the firm’s culture of communication, creativity, and collaboration. Over the years, Mackey Mitchell has received numerous awards for its people-oriented culture and client service. “We’ve had a long and meaningful history with downtown St. Louis beginning with our first office in the Railway Exchange Building,” said MMA president Dan S. Mitchell. “It’s exciting to reconnect with the city in a space that reflects our company’s vibrant culture.”