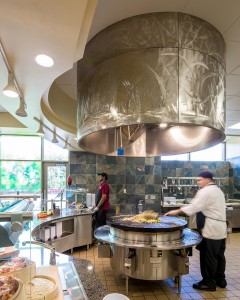 Named as a Top Project, the University of Minnesota’s ‘s 17th Avenue Residence Hall was featured in the recent issue of Finance & Commerce.  The first residence hall built on campus in more than a decade, according to Gary Swanson of Mortenson Construction, “the project has set a new standard for housing at the university. ”  With great views, sustainable design features and a splash of modernism, the building sits comfortably in the neighborhood as well as in the historic area of University Avenue known as Fraternity Row. With its open-prep kitchen, the residence hall has been published in “Campus Dining Today,”  and was named a finalist in the prestigious “Best in Real Estate ” awards program  sponsored by the Minneapolis/St. Paul Business Journal. Kudos to the project team which included Dan Mitchell, Jordan Gatewood, Nick Naeger, and Stacey Wehe, along with local architect- of-record TKDA Architects, and Mortenson Construction. The building was recognized as a “top project” for its degree of difficulty, sustainability efforts, design creativity,  and innovative construction techniques.