Many university campuses across the country are identified by, and pride themselves in, the unique architectural history and style of their campus core. At Mackey Mitchell, we love to engage these distinct campuses and get to the heart of the prevailing architectural style, what Gene Mackey used to say “understanding the DNA, or language, of the place.” By studying architectural precedents through sketches, historical photographs and in-person visits, we make ourselves fluent in the language of their architectural style and become able to recreate new buildings that fit within the history and context of the place. 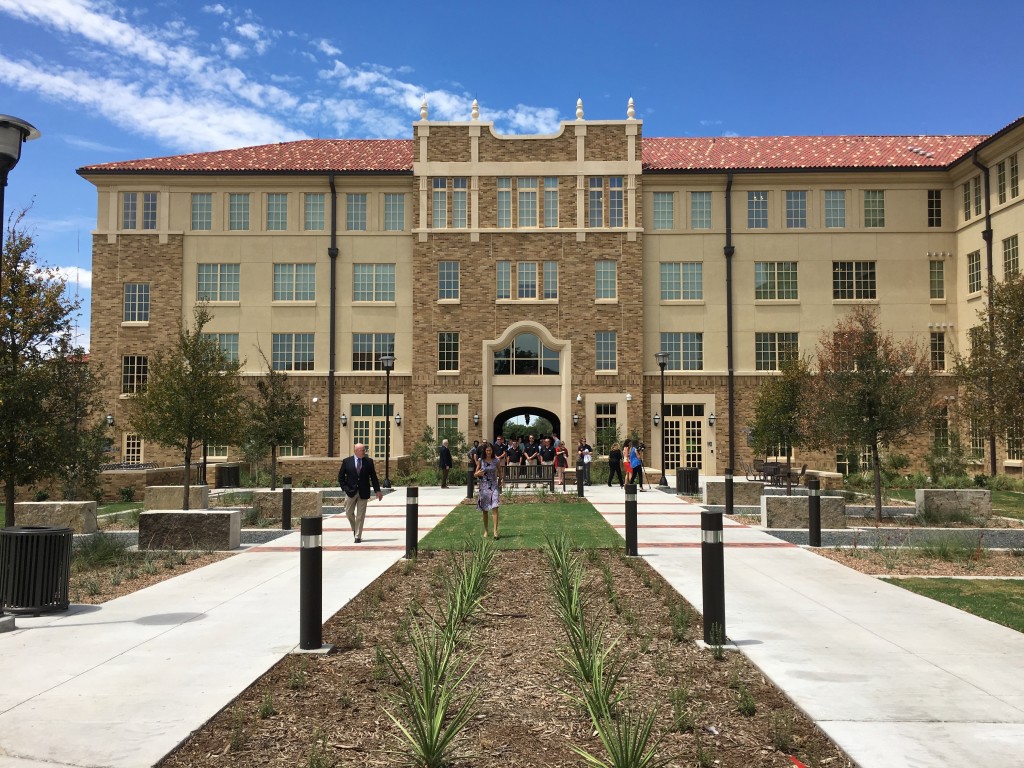 One of these distinctive campuses is Texas Tech University, where many buildings on that campus are designed and rendered in the Spanish Renaissance style. Our latest project, Honors Residence Hall, designed in conjunction with Barnes Gromatzky Kosarek Architects and the Whiting Turner Contracting Company, was completed in August of 2017 and is located close to the campus’s core. The consistent architectural style of the buildings in the heart of the campus required us to understand the existing language, as well as investigate other Spanish Renaissance architectural precedents such as Balboa Park in San Diego and Forest Park in St. Louis.

To answer these questions, we visited campus to experience the architecture first hand. Buildings such as the Administration Building, the Chemistry Building and the Mathematics & Statistics buildings all spoke a clear message of tan and brown brick that reflected the surrounding landscape, pleasantly scaled colonnades to give protection from the harsh West Texas sun and elegantly detailed stone used to highlight key architectural elements. 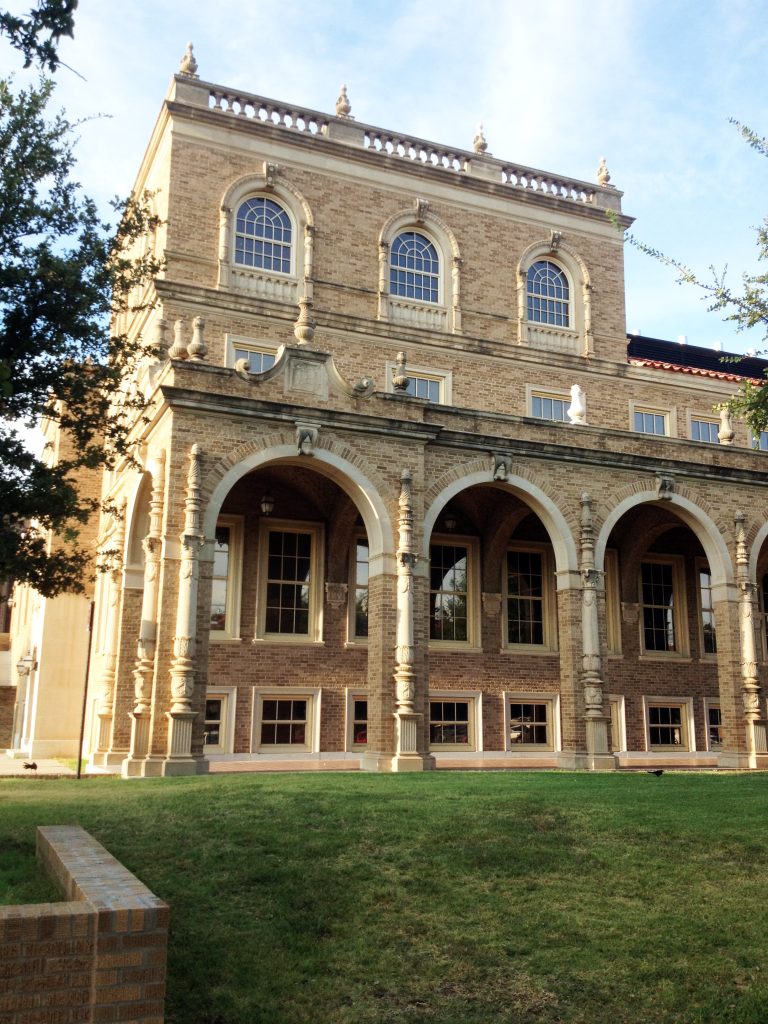 In addition, we drew on other Spanish renaissance inspiration from Balboa Park’s Cathedral and Forest Park’s Lindell Pavilion. In the case of the Cathedral, the central entry is offset by a tower. Because of the enormous height of the tower, the entry is detailed with two stacked openings: an entry on the ground level and a large window above. These elements help bring the scale of the structure to a more engaging, human level that helps the cathedral be more inviting. 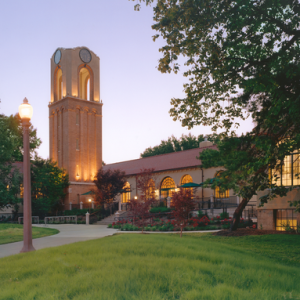 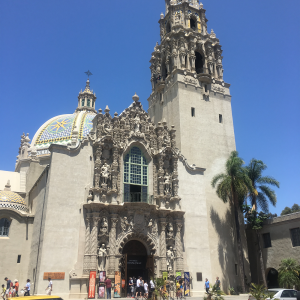 At Forest Park’s Lindell Pavilion, the tower is also tall compared to the surrounding structure. By changing the material from brick to stucco, the tower scale is reduced and the clock/bell opening is given more prominence. Both of these design elements were used in the design of the Honors Residence Hall entry to help reduce the visual height of the tower.

Understanding an architectural language is not only focusing on the large scale design issues, it also must take into account smaller phrases that are being spoken. The patterning of the brick and windows in the architecture at the core of the campus at Texas Tech told a story that we used to articulate our project. As can be seen in the attached elevation detail, we used a number of different ideas give life to the elevations of the Honors Residence Hall. A change in brick patterning from flemish bond at the first floor to running bond above, a double soldier course at the bottom of the second floor and a stacked bond pattern around the first floor windows communicates playfulness of the brick to help engage and give interest. In addition, we used the windows as a tool to differentiate the floors. A taller window at the base gives way to wider, shorter windows on the second and third floors. The windows are then divided into two smaller windows at the fourth floor. This move is both architecturally inspirational as well as key in giving each student identity within their rooms.

By immersing our minds and hearts within the language of the Spanish Renaissance style and listening to what that style had to say, we were able to create a building that is both timeless within the campus context and contemporary in the function of current residence hall design. 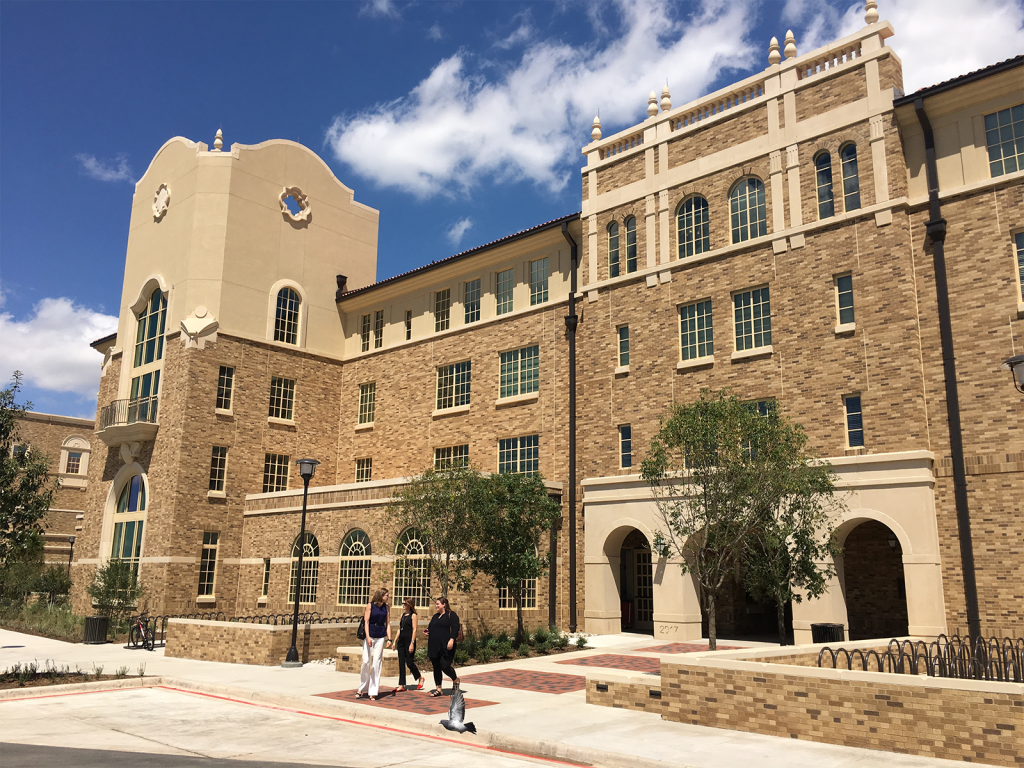