For today’s installment in our series, we are going to stray from the typical “Q&A” format for these posts and let Tom Moore tell his story with his sketches, documenting his path from where he lives to where he works. Architects use sketching as a tool to better “see” the world – it’s a careful examination of our environment, especially seeing buildings in their context. 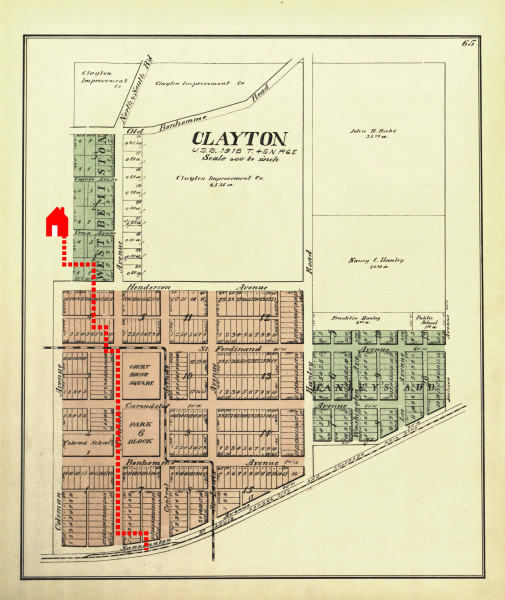 Clayton was formally platted in 1878. The walk route is shown in red.

Back in 1876, the city fathers of St. Louis thought it would be a good idea to freeze the western city limits a little west of what is now Skinker Boulevard, now way inside the metropolitan area.

All counties need a county seat, so when Ralph Clayton and Martin Hanley donated 104 acres, the county seat became Clayton. The Hanley House still exists as an historical building and is open for tours. The city of Clayton was formally platted in 1878 with some familiar street names, such as Carondelet, Central, and Meramec Avenue. But, other main streets have been renamed to Forsyth, Bemiston and Maryland.

My wife and I moved to St. Louis City from Arkansas in 1976. I got a job as an intern architect for a firm in Clayton which occupied a small converted house, now in the footprint of the new Centene Headquarters building. After three years, I moved on to another Clayton firm whose office overlooked Shaw Park until 1991. We now live in Clayton. I know the town pretty well and have watched it grow over the years.

Continuous development in Clayton for 139 years has created a dynamic mix of old and new, good and bad, however the basic grid of downtown is still there. 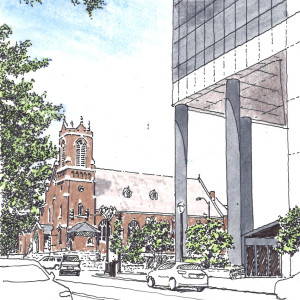 St. Joseph’s Church sits next to the Graybar building. I find the contrast mildly interesting, with nice legs!

A good example is St. Joseph’s Church. They laid the cornerstone of their new church in 1912, moving from a previous structure in Olivette (what is now Centerton park). Graybar moved their headquarters from New York to Clayton in 1982. All the architectural styles thrown together into a mix is sometimes surprising and startling.

I don’t like to drive in rush hour traffic, but who does? When I started at Mackey and Associates in 1991, I found all about the Highway 40 morning and evening commute to Union Station and later Cupples 9 near Busch Stadium, ugg. As 2004 rolled around, my wife and I had been through two house renovations and a new house before we found a small house with potential on the north side of Clayton. I continued to fight traffic until the Shrewsbury extension of Metrolink came to Clayton in 2005. So, I found out that I like to walk to the Clayton stop and relax on the train to downtown. 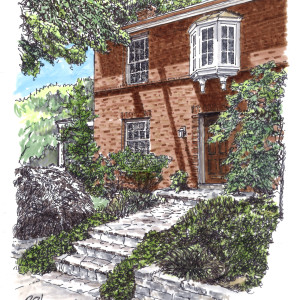 Our home on North Brentwood

The distance from home to the station is about 3/4 mile. It takes 12 minutes to walk or maybe eight minutes on a jog. The scenery along the way makes for great drawing subjects. Why not draw the things I see on my walk and on my ride?

I sometimes take shortcuts. So my journey to work has become a shortcut to the Metrolink station on the south edge of the business district. The alleys are where you see where the city growth has really happened. These sketches are my route. 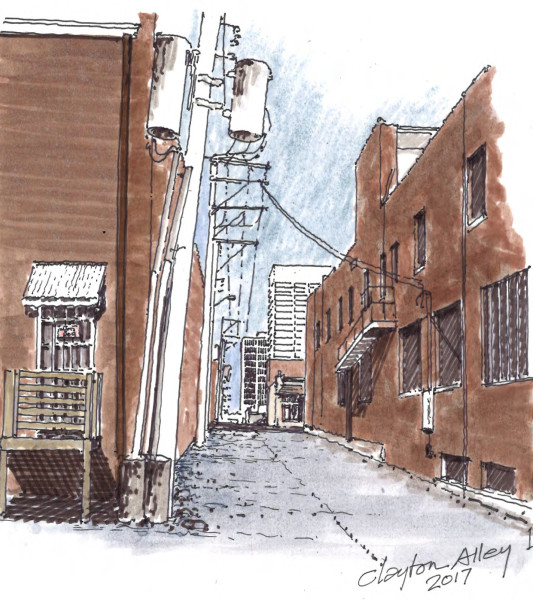 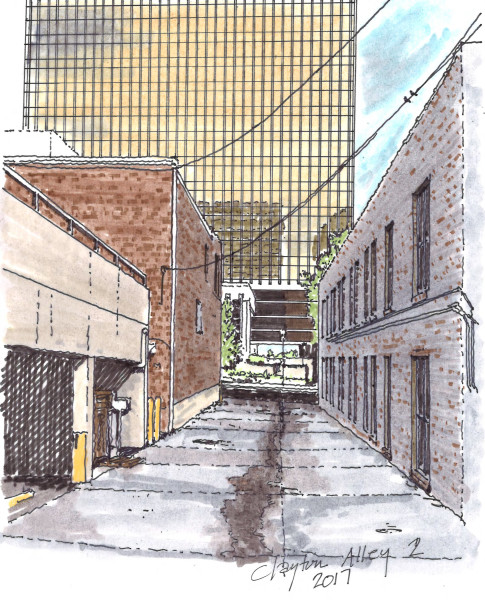 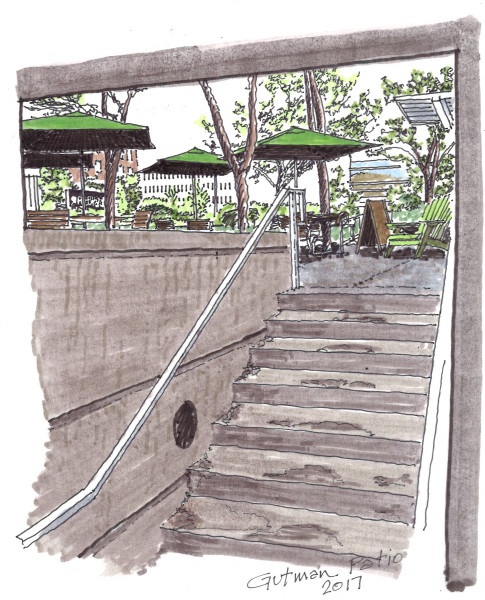 My route takes me under the Fifth Third bank and down the alley behind a couple of title companies before ducking under the covered parking at the Gutman Plaza and coming up into the light of the nice little terrace that Mackey Mitchell designed 15 years or so ago and is used by First Watch. Nice to see how it has aged and become a part of the Clayton mixture.

Then it’s a straight shot down Meramec to the Metrolink platform. On winter mornings, that is one cold place if you miss the train. It’s a horrible feeling to turn the corner in the Clayton garage only to see it pulling away. 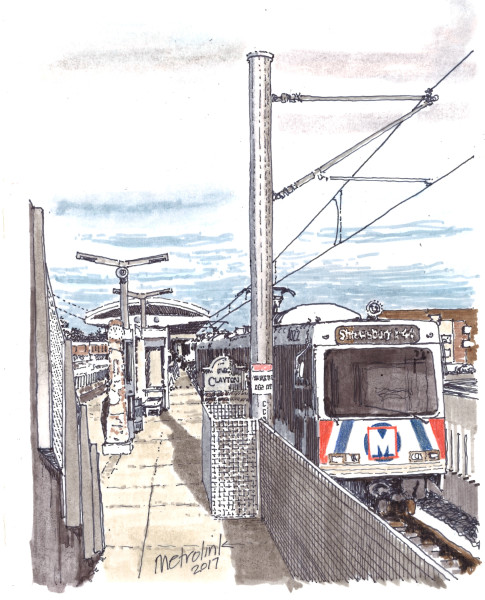 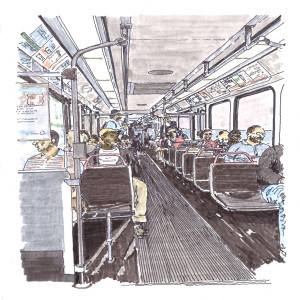 Even inside the train, filled with people passing time going to wherever, you realize that everyone you see is having their own unique experiences. But, I still see the contrast: buildings jumbled together without a master plan, sometimes making for the best art subjects.

My downtown station is called “Stadium.” As I take the steps up to the bridge and turn the corner, the view yields a nice panorama of the Cupples buildings. 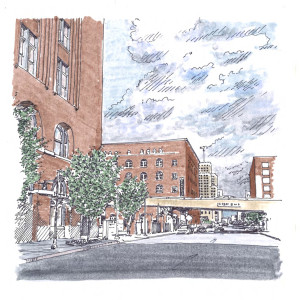 After Eads Bridge and the downtown tunnel to Union Depot was completed, Samuel Cupples and Robert Brookings built the Cupples Warehouses, designed by Eames and Young in 1894. There were a total of 20 warehouses completed in 1917, eight remain. Today, they are on the National Register, sadly 12 were demolished due to neglect. The warehouses were numbered, including Cupples 9, where Mackey Mitchell moved to in 2012, and is our home office. 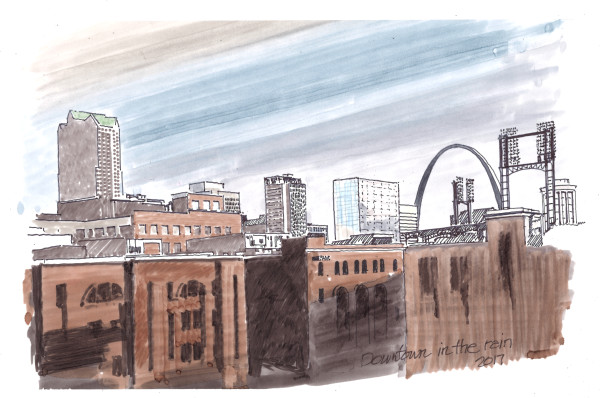 The Downtown St. Louis skyline in the rain.

Both the views of and from the 5th floor windows give panoramas of Downtown. The buildings and the views I’ve seen on my way to work have inspired me to pick up my sketchbook and sketch more of this great city and its skylines. Next sketch subject … The Big City.