Watercolor rendering of the aerial view of Soldiers Memorial by Laura Linn. Courtesy of the Missouri History Museum

With Veterans Day upon us, it’s a great time to give an update on Soldiers Memorial, a project that embodies the honor and respect owed to those who have made the ultimate sacrifice for our country.

First, for a history of the building, the project, and Mackey Mitchell’s involvement, see our earlier story here. As the architect, our goals for the project are to take care of years of deferred maintenance, provide amenities to honor those that serve our country, and to make the building universally accessible.

Amenities to the project generally fall into two categories. Either they are meant to provide places for private somber reflection or are used for public commemorations.  The previous layout of the site forced most Soldiers Memorial-related events onto the podium level of the building, where space is limited and not appropriate for all occasions. 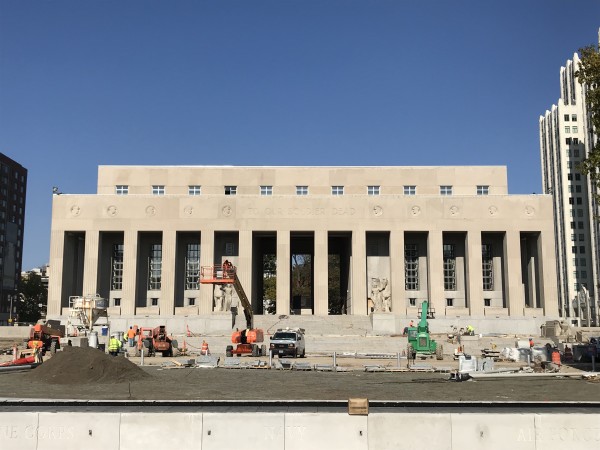 View during construction of the building from the south where a memorial lawn will be. 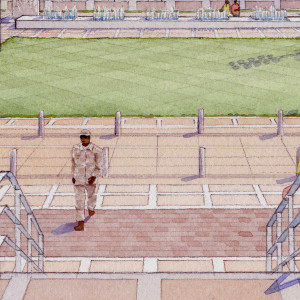 Rendering featuring a new memorial lawn in front of the museum.

A new memorial lawn, located directly south of the building solves that. It provides an open area where seats can be arranged appropriately to see the presenter and have a full view of the building as a backdrop.

Both the Soldiers Memorial and Court of Honor provide existing places for somber reflection with the names of local fallen soldiers engraved into the stone walls of the cenotaph and memorial walls, respectively. New lighting projected on the stone surface helps the names stand out more clearly and be more easily read.

The space within the Court of Honor will be activated with two water features. The fountain, with its bubbly water jets, helps mask the cacophony of sound created by traffic along the adjacent busy streets. What the team has referred to as the five branches fountain includes the five branches of the armed forces (Army, Marine Corps, Navy, Air Force, and Coast Guard) engraved along the sides of its limestone walls. The reflecting pool, quiet and almost still, allows you to see the reflection of the existing 40-foot-high ‘broken bayonet’ sculpture by Hillis Arnold framed by the surrounding city skyline. You will also see the new flagpoles, south of the Court of Honor, each representing five branches of the armed forces. 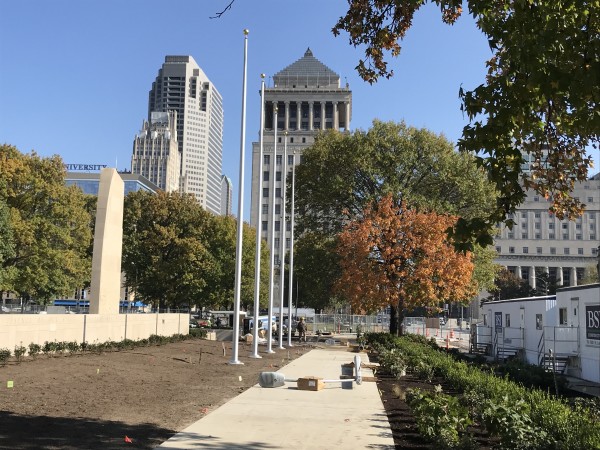 The five flag poles for the flags of each branch of the military during construction at Soldiers Memorial.

Rendering featuring the reflecting pool and the five flags for the five branches of the military.

Soldiers Memorial and the Court of Honor undergoing construction showing the reflecting pool and the limestone wall engraved with each branch of the military.

Most of the project’s challenges come from preserving the historic details of the building, while at the same time making much needed updates. Delicate marble wall panels were marked, removed, stored offsite and then remounted just to install updated HVAC piping behind them. The same process was used for the stairs to replace the structure underneath. The biggest challenge though, was making an 80-year-old building and its surrounding site accessible.

In the 1930’s little thought was given to accessibility.  This is apparent when the building’s Assembly Hall, located on the second level, is separated from the only restrooms by eight steps. Wheelchair access to the building itself wasn’t even available until 2003, when two ramps providing connection from the street were added to the north side. However, they are remote from the other amenities of the site and distance can be a barrier. 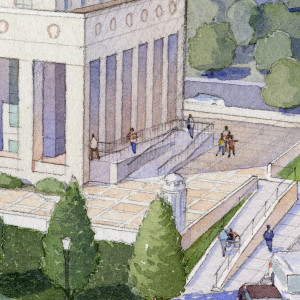 What we’re undertaking in this massive revitalization is to correct these accessibility issues, while maintaining the historic integrity of the building. In addition to the ramps on the north of the building, two ramps will be added with a better connection to the Court of Honor and Memorial lawn, south of the building.  Designed with a gentle slope and plenty of turnaround space, they are clad in granite and limestone to correspond to the existing building materials. A new high-end chairlift solves the eight-steps issue at the second-level Assembly Hall. A second elevator has been added, so the higher level of the second floor can be accessed directly. The Assembly Hall itself has a new accessible ramp connecting to its existing built-in platform in the front of the room. Existing restrooms have been modified to exceed today’s accessibility standards, as well as the addition of new accessible family restrooms. Doors to enter the building and first floor galleries have been equipped with automatic door openers. This is to ensure everyone who visits the building can do so comfortably.

Outside the building, the level of the Court of Honor is lower than the surrounding walkways, so universal accessibility had to be considered here as well. The previous layout had two entrances: stairs and a ramp with a slope that was too steep to meet accessibility standards. Correcting the slope on the first ramp extended the length while adjusting the levels of the ramp landings. We also provided an additional entry point by adding a ramp (with an accessible slope) to the northeast corner. This allowed us to keep the stair, per the original design.

Keeping the original detail and design intent is what we strive for with every decision we made on the project. The challenges were many, but when the project opens a year from now, we will have done our best to provide universal access for everyone to honor and revere our local soldiers who made the ultimate sacrifice for our country.