“At the end of the day, our projects MUST have higher meaning; they must inspire those who use them.”   These are the words of our founder Gene Mackey. Mackey Mitchell Architects is bringing the same sense of purpose to the extensive renovations underway at the Soldiers Memorial Military Museum and Court of Honor in downtown St. Louis. While MMA is known nationally for work on higher education campuses, in St. Louis our firm has made significant impacts on the built environment throughout the Midwest region for nearly 48 years – from revitalizing an entire neighborhood in the 1980s (Skinker-Debalivere), to creating intimate and inspiring spaces for beloved institutions (Missouri Botanical Garden, Washington University, and the St. Louis Zoo), to revitalizing cherished city landmarks (Old Cathedral, Lammert Building, Lindell Pavilion in Forest Park). 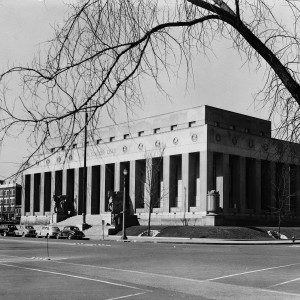 The project at Soldiers Memorial presented interesting challenges for the design team, whose mission was to revitalize the building and its surrounding features, as well as create a new, relevant destination for St. Louisans to connect to the city’s military history.  The building has been in continuous use since the opening ceremony in 1938, but has not had any significant updates.  It was created to honor the sacrifices of St. Louis citizens during World War I.  The classical structure, with elegant touches of art deco detailing, was designed by the architecture firm of Mauran, Russell & Crowell.  It features two exhibit galleries, an assembly hall, meeting rooms, and offices.  St. Louis-born sculptor Walker Hancock created four allegorical sculptures that represent the values of Loyalty, Vision, Courage, and Sacrifice.  Inside the building, a soaring 38-foot high ceiling of mosaic tile tops the loggia area. The tiles form a large gold star dedicated to the mothers of those St. Louisans who died in combat. A black granite cenotaph in the center of the loggia is inscribed with the names of 1,075 St. Louisans who lost their lives in World War I. 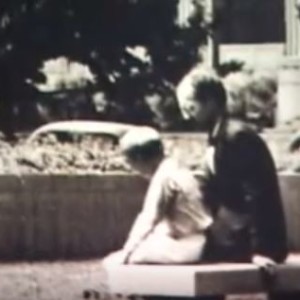 A young Gene Mackey (left) sitting with his father at the Court of Honor site.

Across the street from the museum is the Court of Honor, an open green space dedicated in honor of the dead from WWII.  The memorial was designed by Gene Mackey’s father, Eugene Mackey, Jr. in partnership with the sculptor Hillis Arnold.  Where the Soldiers Memorial is monumental and imposing on its surroundings, the Court of Honor is contemplative and tranquil. By slightly lowering the court below street level, the visitor’s senses are removed from the noise and bustle of the city.  A soaring limestone shaft, reminiscent of a broken bayonet, rises up out of the courtyard, and is decorated with depictions of the various realities of war.  Memorials for those who gave their lives in the Korean and Vietnam wars were added in the 1970s

Today, the Soldiers Memorial is still actively used by veterans and school groups, but the facility has become disconnected from the general population, usually serving as just a backdrop to food festivals and race finish lines.

Mackey Mitchell’s engagement on this exciting project began over five years ago, when Gene Mackey received a phone call from a concerned citizen,  and after visiting the memorial, formed a coalition of civic leaders who dedicated themselves to bringing about much needed improvements to the facility and grounds. MMA was chosen for our thoughtful and inspired renovations of St. Louis landmarks and our personal connection to the site.  The Missouri Historical Society was selected to take over management of the renovation and long-term operations, while the City of St. Louis will retain ownership. The collection of artifacts will be lovingly preserved and presented using the latest in exhibit design technique. The renovation will bring the memorial into the 21st century, while retaining the original art deco detailing.

Site improvements include narrowing Chestnut Street to strengthen the connection between the Court of Honor and Soldiers Memorial. The Korean and Vietnam War memorials will be relocated to newly dedicated areas, and additional memorials will be created for subsequent conflicts in Iraq, Afghanistan, and the Gulf. A new reflecting pool and a new spray fountain will contribute to the sense of place. Urbanistically, the Court and Memorial will be a more unified and respectful experience. 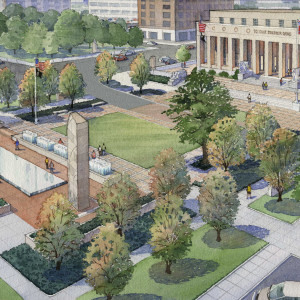 Through the dedicated efforts of many, this project will fundamentally transform this area of the Gateway Mall in downtown St. Louis, educating new generations about the sacrifices of those who came before.