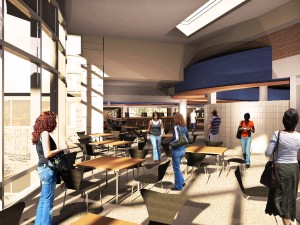 A thoughtful message was sent to the design team working on the new Stout Memorial Student Union at the University of Wisconsin. Our client had been reading “The College Union Idea,” published in 1947 by Porter Butts, who served as Stout’s first student union director in 1927 and went on to become ACUI’s (Association of College Unions International) publications editor.  According to the former director, “…a good union is a tailor-made job…and cannot be arrived at…by consulting other unions.  And it cannot be designed by an architect out of the top of his mind; it represents an architectural problem of the first order, requiring the maximum imagination and care.” The client said the passage “made him think of us,” stating that its content rings as true today as it did all those years ago. Mackey Mitchell’s project team includes John Burse, Jim Konrad, and Merrilee Hertlein.  Frisbee Architects is the Architect-of-Record.