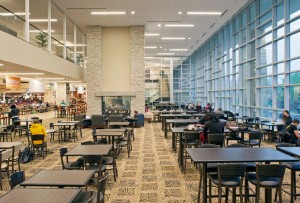 Since the completion of the MU Student Center at the University of MIssouri, Columbia, campus dining services has observed an increase in sales from its dining locations in the center. CDS Retail Operations reported that sales at the new student center are 25 to 50 percent higher than food sales in the old Brady Commons food court on any given weekday.

Transforming the student center and expanding it to meet the ever-growing student activity service and social needs was a priority for Mizzou. Mackey Mitchell, working with Holzman Moss Bottino, created a new student center with a modern central core that welcomes students from the north and south into the main dining area with increased capacity, display cooking stations, and a themed Grille commemorating Mort Walker, an alumnus and esteemed cartoonist who created Beetle Bailey.  Since its opening Mort’s is up 60 percent in sales per day.  Part of the increase may be due to the atmosphere of  “The Shack,” which features pool tables and large-screen projectors for viewing sporting events.  Overall, it was reported that the student center makes between 3,000 and 3,5000 transactions per day.