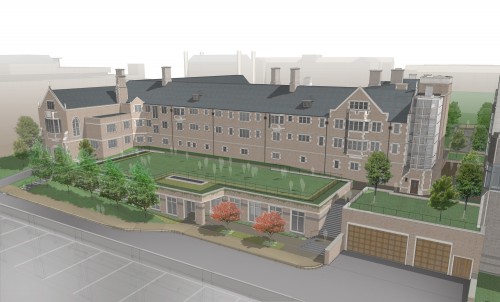 McMillan Hall at Washington University in St. Louis was built in 1907 as the university’s first women’s residence hall. By mid-century, the building had been renovated for academic use for various Arts & Sciences humanities programs, chiefly the Department of Anthropology.

To maximize land-use surrounding the new Business School building project, the University elected to remove McMillan’s Gymnasium Wing, which had been used since the conversion as a large classroom, with laboratory and smaller classrooms below. Mackey Mitchell was engaged to design the Gym Wing’s replacement, as well as a new 5-level elevator/stair tower, and a 14,000sf, one-story addition to replace the classrooms and laboratories lost to demolition. To increase efficiency, a number of teaching, laboratory and office spaces on all floors of the existing building were renovated. The new addition, with a green roof, contains a 176-seat auditorium-style pooled classroom, as well as a suite of specialized Anthropology teaching lab classrooms with interactive A/V technology, chemical fume hood, microscopy, and storage space for an extensive and irreplaceable collection of fossilized plant and animal species.  The project team includes Gene Mackey, Greg Frankenfeld, Marcus Adrian, Gregory Keppel, Sara Holt, and Tom Young.