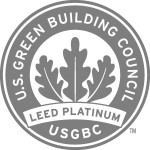 In a recent ranking of the “highest-rated LEED certified buildings” in the state of Missouri, the LEED-platinum Alberici Office Headquarters building designed by Mackey Mitchell still tops the list with a total of 86.96% points earned. The ranking was featured in the May 10 issue of  the St. Louis Business Journal. Also making the list were two LEED-gold projects designed by Mackey Mitchell at Washington University in St. Louis. These include College Hall and South 40 House, Phase 2, and Eliot B Hall. According to the article, “The state of Missouri is making waves in the green building movement. The USGBC noted that more Missouri people, institutions, and organizations are joining the LEED way of life at a faster pace than other U.S. states.”