On Saturday, August 10th, it was officially announced that Principal Steve Emer, AIA, LEED AP, was elected president of Mackey Mitchell Architects. Emer is the first elected president in the firm’s 45-year history. In 1968, Gene Mackey III, FAIA founded the firm and served as president until 2001. In 2002, Dan Mitchell, FAIA, was named president and chief executive officer, with Gene Mackey serving as chairman. 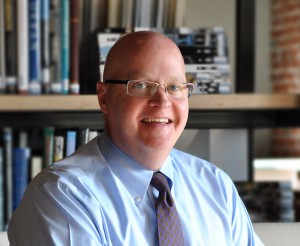 To prepare for the firm’s future and Dan Mitchell’s recent ownership transition, the company elected five shareholders to serve as its Board of Directors, including architects Marcus Adrian, John Burse, Steve Emer, and Thomas Moore. Dan Mitchell will continue to serve as member of the Board.

“We’ve  structured the company to be in position for new leadership,” says Mitchell. “We want to make sure we have a strong succession plan that will maintain the firm’s strengths and core values in the long term.”  Emer’s unanimous election as president reflects the collaborative spirit that exists among all the firm’s principals.

A graduate of the Leadership St. Louis program, Steve has a keen interest in history and has fulfilled two terms as Commissioner of the Kirkwood Landmarks Board and as an advisor to the Renovation Committee at the historic Gothic Holy Trinity Church in St. Louis’s Hyde Park neighborhood.  According to Dan Mitchell, “Steve exudes a quiet confidence that clients respond to – he’s always curious, interested, and engaged.  He possesses an all-encompassing range of skills, which is why he was an obvious choice to take on the challenges of president.”