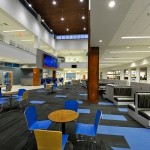 From the game room and dining venues, to the bookstore and lounge spaces, the new Charger Union at the University of Alabama Huntsville has it all!  Tour the new student union led by SGA (Student Government Association) president Nandish Dayal as he points out center’s highlights.

Centrally located and now a prominent icon, the Charger Union is an integral part of an effort to transform the campus from a commuter school to a more traditional campus. According to Dean of Students Regina Hyatt, “The presence of this building will transform the student life experience for many generations of UAH students.”  MMA’s project team included lead project designer Gwynn Zivic, along with John Burse, Merrilee Hertlein, Jim Konrad, Clint Smith, and Stacey Wehe. Turner Batson was the Architect-of-Record.