This is part three of a five-part series. Read parts one and two.

The brain. Every one of our human abilities, right down to our survival, is controlled and choreographed by that mysteriously complex organ behind our eyes and between our ears. It would be absurd to design for any dimension of human ability – sensory, physical, and social – without recognizing the brain’s mostly pre-cognitive role in each of those areas. Asleep or awake, our brains continuously process sensory input from every part of the body. In traffic, we have an internal auto-pilot that never stops judging speed, location, and proximity. In conversation, our faces blush before we realize or process the embarrassment. And yet, we generally aren’t consciously aware of all this activity. These pre-cognitive functions happen before we can think about it. They happen even if we DON’T think about them. They happen even if we try to suppress them.

Let’s focus for a moment on the more voluntary brain processes – the ones we usually heap under the heading of cognition. Let’s contemplate the complex processes they represent. Comprehension. Logic. Memory. Decision-making. Intuition. Problem-solving. Creativity. These are functions we are only beginning to understand, and yet they happen every waking minute. We don’t quite know how any of them work, but we know what they feel like. Notice I haven’t even mentioned things as nebulous as emotion, judgment, or even consciousness itself.

While it can be controversial to consider these various cognitive processes “abilities,” in the academic and corporate world, it can’t be denied that we have developed entire industries to measure, elevate, and even medicate around these cognitive processes. Standardized testing. Curriculum standards. Developmental milestone charts. Performance reviews. However arbitrary our current standards may be, we constantly measure, rank, accredit, and group ourselves, our children, and their schools into tiers of cognitive ability or effectiveness.

Depending upon your perspective, the idea that one person can be measurably smarter than another person may be fascinating, elitist, irrelevant, or all of the above. But the idea that one person can become smarter, i.e: that each one of us might be able to improve our various cognitive abilities, is a captivating possibility. And it is roughly what we propose to do in every school and every classroom we have ever built.Human cognitive ability is, therefore, an essential design consideration.

The illuminating questions are too many to list here, but I’ll start with one of the most obvious: how can we design buildings to better accommodate people with a wide range of cognitive abilities? One easy answer is clarity of organization. Whether we know a building well or not at all, every time we navigate our way through one, we are faced with a number of decisions. Do I enter here, or over there? Do I take this corridor, or that one? Am I on the correct floor? The most basic thing a designer can do to help people make those decisions without fear, frustration, or danger is to organize the building’s program, entrances, and circulation in a clear, predictable way. Not just put things where you would most expect to find them, but establish an organizational logic that remains consistent from side to side, from wing to wing, and from floor to floor.This kind of clarity doesn’t just help those with cognitive delays or damage; it reduces anxiety for everyone. 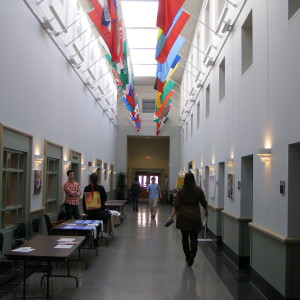 BEFORE: Imagine what this corridor feels like to a  9 year old with autism – can’t see into the spaces, feels foreboding, only small openings, light at top but dark where you are navigating

The strategy goes deeper from there. Once you establish a clear, consistent organizational logic that informs overall building design decisions, the goal is to use every one of the thousands of remaining design decisions to reinforce it. Exterior materials and treatments can be used not only to highlight entries, but to reveal which parts of the interior are public, and which are private or off-limits. The color, texture, brightness, and pattern of interior materials can promote wayfinding and reinforce memory-of-place that can be useful for repeat visitors. Color and intensity of natural and artificial lighting can be used to mark destinations, intersections, or places of respite or assistance. As a rule, signage is clearest when it does not rely on language. Where it must, the language needs to be both clear and concise. 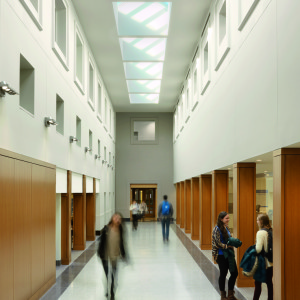 Throughout architectural history, I would contend that the best buildings are the ones that are borne of a single, powerful idea, and commit every part of their expression and function to the clarity and beauty of that one idea. Consider a building like Frank Lloyd Wright’s Guggenheim Museum in New York. It’s not what you would describe as a highly rational building, in a classical sense. It does not rely on symmetry or hierarchy to reinforce predictability. And yet both the idea and the organization of the building are such that they cannot be misunderstood. You see the outside, and you understand the form of the interior. You step inside, and you immediately know how to use the building. Because it is so clear, it’s inconceivable to think of getting lost in that space. 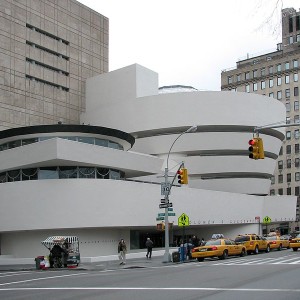 The idea that any successful building requires clarity in its organizing idea is pretty relevant to this conversation on cognitive accessibility, because I can’t think of anything more intrinsically cognitive than ideas. It means that our passion to create great buildings might be deeply connected to our desire to create highly inclusive buildings – that embrace all people with equal clarity and consideration, regardless of our level of cognitive ability. Beauty probably always requires clarity. As architects, I think the two are equally our calling.