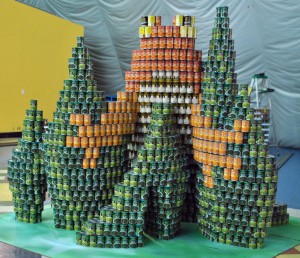 CaNstruction is a non-profit organization that holds annual design and build competitions to construct fantastic, giant sized structures made entirely out of canned food which are then distributed to a local food pantry.   The 11th annual St. Louis CaNstruction event focused on “Climate Change and Endangered Species,” prompting the idea for Mackey Mitchell’s “Croaking Frog” structure, since frogs are considered an indicator species in a changing environment.

Starting at 7:30 am, the design team worked 12 hours to build the structure using 5,600 cans of food, six tape guns and a case-and-a-half of heavy-duty packing tape.  MMA has won over 12 local awards and two national awards for its structures over the past 10 years.  Our 3-D model of “Croaking Frog” was transformed into sculptural art which will be on display until March 28th at the St. Louis Science Center.  After deconstruction, all 5,600 cans of food will be sent to the Harvey Kornblum Jewish Food Pantry which services over 4,000 families each month.