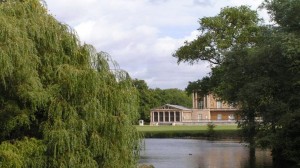 When President Obama breezed through St. Louis during a recent fund-raising event, he also enjoyed dinner at a private St. Louis residence. Of special interest to Mackey Mitchell was a comment made by visiting reporters who were “wowed” by the home’s palatial pool house, which was designed by our very own Tom Moore. The press corps was sequestered in the super-cabana with its large-screen TV, a second-story loft, and a thoroughly equipped kitchen.  One reporter remarked that it was the nicest pool house she had ever stayed in while covering the president.  “Well, number two actually, ” the reporter corrected herself, “the pool house at  Buckingham Palace was pretty nice!”