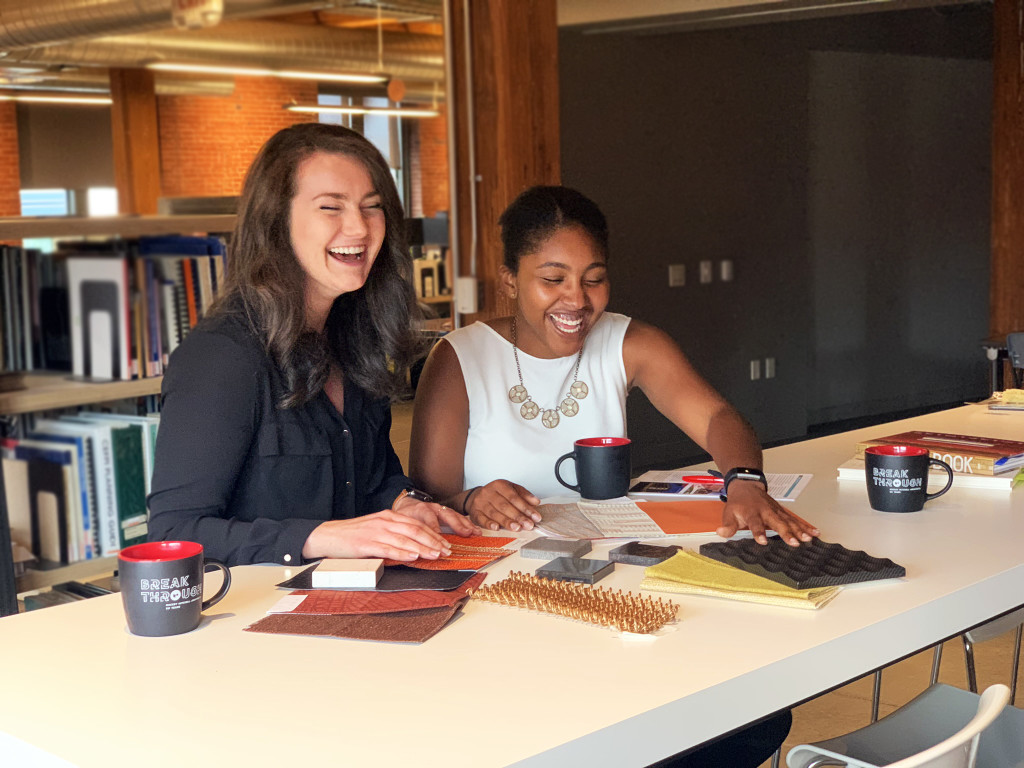 It’s late August and this time of year brings us mixed emotions of excitement and sadness. We’re excited to see college students across the country, from Texas to Pennsylvania, exploring their new MMA-designed spaces for the first time, but we’re also sad to have to bid farewell to our summer interns. Throughout the history of Mackey Mitchell, we have supported the growth of young people by offering summer internships where students are exposed to our practice and learn how we effectively serve our clients. This summer we were extremely fortunate to have two amazing interns in Halie Moss and Kia Saint-Louis, graduate students from Washington University in St. Louis.

Before their departure, we sat down with them for a Q&A to spotlight their experiences, perspectives on architecture, and what they’ve enjoyed most about their time at MMA.

“They both fit in immediately, demonstrated a limitless curiosity, were extremely productive and poised beyond their years. In client meetings they made noteworthy contributions, exhibiting the humble confidence of seasoned veterans. We also appreciated their sense of humor and willingness to share their lives with us. We will miss Kia and Halie, we hope they stay in touch with us, and we wish them well on the rest of their journey”

How did you become interested in a career in architecture?

Kia: When my family and I were living in South Africa, we traveled the continent a lot and I got very interested in how the built environment changed from place to place, from Egypt to Tanzania, how prosperity and cultural aspects influenced architecture. But also how you can use architecture to break down socioeconomic barriers or racial divides.

Halie: My mom is a theater teacher, so I grew up on and off stage doing just about everything there is to do. Designing sets then building and taking them apart was a segue for me into architecture. My dad is also a mechanical engineer and I spent time learning from him. To me, architecture is a blend of solving problems creatively–­­­­­it’s a science and an art, which I like.

What were your goals coming into this internship?

Kia: I just wanted to learn more and experience what it feels like to actually practice. It’s a more valuable experience to be able to learn from professionals. Not that our professors aren’t professionals, but it’s not the same in an academic environment versus working in a firm setting and experiencing the day to day activities. The client interaction is something you can’t learn in school. And of course, getting better at Revit is always a plus!

Halie: My previous firm experience was in a much smaller, three-person firm and the scope of projects and type of work was completely different. I’ve really enjoyed learning about the process that projects go through, from marketing efforts and preparing for interviews to all the stages. It’s interesting to see how projects go from an idea to being tangible and being able to see the lifespan of a project develop.

What has been your favorite part of interning for MMA?

Kia: The food! Haha. But seriously, the people are awesome. I like the amount of interaction that we have here – we’re not just worker bees sitting in a corner. We’re CC’d on emails – I know that seems minor, but you feel like you’re actually on the project team instead of just helping with a task. You hear stories of interns at firms of this size and they’re doing grunt work like bathroom details the entire time, which are important, but you’re not maximizing your growth. Here I’ve learned a lot.

Halie: I don’t ever feel micromanaged and I appreciate the balance between working independently but also being a part of discussion and kept in the loop. I appreciate the accessibility of the principals. Several principals have approached us throughout to check on us and ask if we’re enjoying it but also to see if there are other things we’re interested in learning about or working on, or if there is a meeting we’d like to sit in on. But I would say that truly my favorite part has been the culture here. I feel like MMA is very intentional about investing in the people and it makes a difference. When the people are happy, the work is better.

What have you learned about during this internship that was unexpected?

Kia: I didn’t expect to learn so much about code. In my previous firm experience, I never had to consider code so much. For example, one project I helped with had academic spaces in what were previously residential structures, so there are several different types of codes that must be considered. I didn’t expect to learn as much as I have in that area.

Halie: I have been working on a student union project and I’ve been somewhat surprised by the extensive development of the program for that building. It’s gone through so many iterations and conversations and there’s so much more that must be considered than I previously realized. In school, you’re either given the program on day one or it’s something you figure out in two weeks. But seeing how much it can be changed over time in real practice and how many stakeholders, consultants, and others that must be included in the development has been eye opening.

If you could take the ultimate architecture vacation, where would you go and why?

Kia: Scandinavia, specifically for their modern residential architecture. There are beautiful landscapes there and I like how their designs merge architecture with the natural setting to allow users to experience that setting more than we typically see in American residences. Norway, Sweden, Denmark…any of them!

Halie: Well, I would really like to go everywhere. However, one of the cities I’ve been most architecturally impressed by is Hong Kong because of the way they navigate and use the city. The elevated pedestrian pathways are so innovative. It’s also interesting how the city is made up of many islands that range in density from tight, high-tech and modern urban environments to fishing villages, and they’ve been able to merge these vernaculars in way that respects the culture. And there’s bamboo scaffolding!

What changes within the field of architecture are you most excited about?

Kia: More women! And more visibility on women architects. The industry seems to still be predominantly run by older men, so it’s exciting to see things moving to diversity and more recognition for women. It’s also exciting to see the increased integration and merging of architecture with urban planning, public policy, and sustainability. I think collaboration is increasing with those aspects versus working as separate initiatives. They’re all a part of the built environment, so it makes sense that they’re working collaboratively more and more.

Halie: I’m studying construction management as well and there seems to be a shift to more design-build method versus more traditional design-bid-build. Design-build seems to be better for collaboration from the beginning and streamlining the process. I think there’s more value being realized in having the contractor involved early in the process and I’m excited about that.

What is something about the field of architecture that you hope will never change?

Kia:  I hope design doesn’t become stagnant. You have movements in style like modern and post-modern and it seems like there are times when those movements become stagnant and safe and designers aren’t pushing the envelope as much. I think architects by nature are continuously inspired and looking for better ways of doing things, but you can become stuck in a certain design trend. I hope that we never reach a point of not having that desire to collectively push the boundaries.

Halie: I like that the industry evolves so much that you don’t have to get stuck working with one method or process. There are always different ways of doing things to be learned. Additionally, there are so many pieces to the process of projects. There’s opportunity for continuous learning, which I hope will never change.