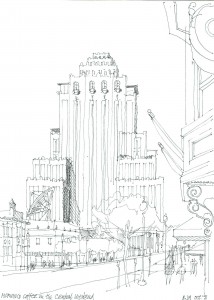 On Saturday morning, November 10th, Tom Moore and Gene Mackey will lead the staff on a walk down memory lane. There will be an exploration of Mackey Mitchell’s earlier work and the architectural changes that have occurred over the years in the Central West End. The group will stop by the Central Institute for the Deaf; Olin Hall at Washington University School of Medicine (a building designed by Gene’s father at Murphy & Mackey); McDonnell Pediatrics (in association with Perkins & Will); and St. Louis College of Pharmacy. They’ll walk along the landscaped Public Realm – seeing the evolution of major street and landscaping improvements made to the South Entrance of BJC along Kingshighway Boulevard.  A visit to the Olson Family Garden at St. Louis Children’s Hospital will reveal a vision that has matured into a lush, green rooftop garden.

Mackey Mitchell has been involved in projects in the Central West End since the early 1970’s working with Pantheon to restore significant historic neighborhoods.  In the mid-80’s the firm renovated the popular Chase Park Plaza, illustrated in Gene Mackey’s  sketch titled “Morning Coffee in the Central West End.”