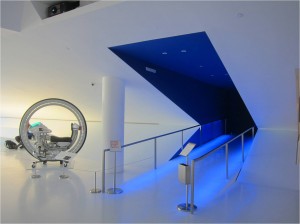 Today’s “travel channel” was presented by Mackey Mitchell staff members who shared stories, knowledge, and images from some recent trips. Jim Konrad introduced us to the  Museum of the Moving Image (photo) in Astoria, New York, whose mission is to advance the understanding and appreciation of the “art, history, technique, and technology of film, television, and digital media.”  Stacey Wehe visited a modernist-style house in the Hollywood Hills section of LA, California, known as the Stahl House, considered to be an iconic representation of modern architecture in Los Angeles during the 20th Century. Kathy Ulkus shared history and images from Killarney featuring some of Ireland’s most noteworthy sites including Ross Castle, St. Mary’s Cathedral, and dramatic landscapes in the Ring of Kerry. These presentations are part of Mackey Mitchell’s culture of knowledge-sharing and life-long learning.