Several months ago, Mackey Mitchell learned that Clay Phillips, who works for the firm in Lawrence, Kansas, had  been diagnosed with a serious health issue that required weeks of special treatment.  When he began working remotely, he  wondered how his sense of “office camaraderie” would be affected. Now he was also wondering how he’d be able to finish some major projects he’d started at his house months before his diagnosis. However, this summer put those concerns to rest. 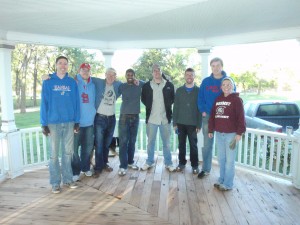 Clay, along with his wife April and their four children live on a small farm with a 100-year old house in need of some work that had been neglected because of Clay’s condition. After some planning and organizing, six thoughtful MMA employees drove to Kansas to help the family with their project needs over a weekend. The Phillips family was humbled and thankful when Kevin Symons,Tom Moore, Avik Guha, Gregory Keppel, John Brown and Margie Fank showed up to lend a helping hand. By the end of day, the barn was clean and organized, trees and shrubs were trimmed, and boards salvaged from the sides of old railroad cars were planed, prepped and put in place on the huge wrap-around porch.

April commented that, “Many hands make light work. Not only did the group help get major work done, but they confirmed that the friendships Clay thought may be missing from working by himself in another state, were indeed alive and well.” She then added, “Clay is much better now, and he’s never been more excited to get up every morning and go to work. Mackey Mitchell is more than an architecture firm. It’s a group of people who truly care for their employees.”