Sporting a green roof, the new McMillan Hall Teaching Lab for Washington University’s Department of Anthropology has been described as “transformative.” Mackey Mitchell principal and lead architect Marcus Adrian commented in the Fall 2013 edition of Anthropology News  commented on the challenges of fitting 14,000sf of teaching space into such a compact footprint. “We used the sloping grade to our advantage, tucking the new LEED-gold addition into the earth. Crowned with ornamental plantings from the new garden roof, the north face of the building resembles a stone garden wall.  Large windows lend rhythem to the facade and allow diffuse north light to filter deep into the classrooms.  According to Fiona Marshall, interim chair of the department, “The labs give anthropology a physical presence that reflects the stature of the department. We are so happy with the building.” 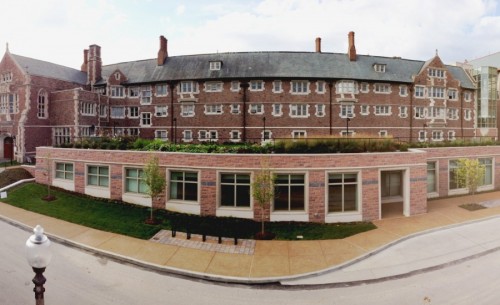