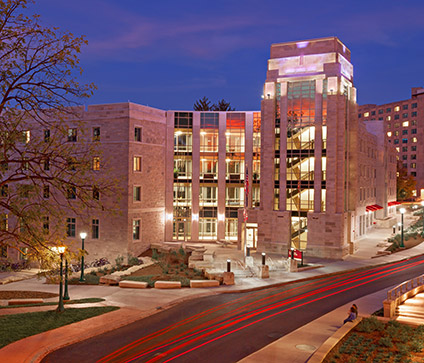 Eight years after the creation of the 21st Century Project sponsored by ACUHO-I, the residence hall of the future is the residence hall of the now. On April 11, Gene Mackey, Jordan Gatewood, and Dan Schneider attended Indiana University’s 21st Century Project Symposium open house to see the results of this long-term planning effort. We’re proud of our work for Indiana University, especially since they were one of only  three institutions in the country to construct  housing projects focusing on the 21st-century design principles of technology, community, flexibility, sustainability, and innovation.

The Rose Avenue Residence Hall focused on the tenet of “building community.” With its scale being much smaller than some of the typical residence halls on campus, the building  has a more home-like feel. Rose avenue offers a variety of living arrangements, with a coffee house on the first floor, and multiple locations to support community interaction.

From recent reports and feedback, the design team has learned that the pod concept developed for Rose Hall helps build strong personal relationships and enhances the “ladder-effect” by providing a variety of unit types. Indiana University’s inter-generational approach provides freshmen with mentoring benefits from upperclassmen. This  thoughtful process of developing “building blocks of community” which encompass the campus at large, the building, floor, wing, pod and finally the room, illustrates how this distinctive campus culture has achieved a successful community-building model for its future. Mackey Mitchell’s design team included Dan Mitchell, Dan Schneider, Gregory Keppel, and Kelli Reeves. MSKTD was the Architect-of-Record.