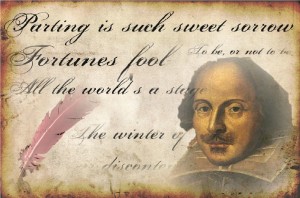 Mackey Mitchell principal Jim Konrad organized an enlightening and educational lunch program by inviting Kurt Schreyer to our office to talk about how “Shakespeare learned to write.”

Dr. Schreyer, a tenured professor of English at the University of Missouri in St. Louis who specializes in Shakespeare has a new book, “Shakespeare’s Medieval Craft: Remnants on the Mysteries on the London Stage.” In today’s presentation he explained the teaching methods used in 16th-century England and how Shakespeare’s early rigorous education shaped his later dramatic and poetic works.

Schreyer’s interests extend to a wide variety of genres and texts across the traditional medieval/Renaissance disciplinary divide, from Chaucer to Milton, and from epic and romance to devotional lyric. He earned his Masters in English and American Literature at the University of Notre Dame, and his doctorate from the University of Pennsylvania. With Mackey Mitchell’s focus on student life and learning, supporting both students and those who teach them, Dr. Schreyer’s visit was not only interesting, but gave us an opportunity to ask questions about how we can do our job better.