For scholars and teachers alike, campus art can enrich the meaning of place and deepen the sense of belonging to a community. Consisting of seven three-dimensional stars laser-cut from stainless steel, “Texas Rising” is among the newest additions to Texas Tech University’s public art initiative. 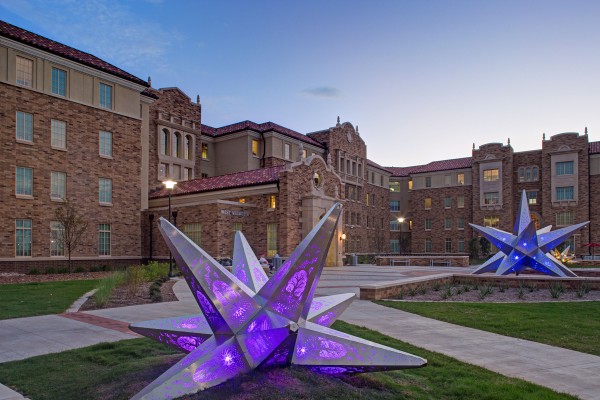 The $485,000 collection was designed by Joe O’Connell and Blessing Hancock of Tucson, Arizona and commissioned by the University’s 1% public art program. Located within the recently opened Mackey Mitchell designed West Village, the centerpiece is nearly 18 feet tall and 21 feet wide. “It’s a really striking piece. This is a big, pretty dramatic building, and this piece was something that would definitely fit in and not be overshadowed by a big dorm,” said Emily Wilkinson, the University’s public art manager. 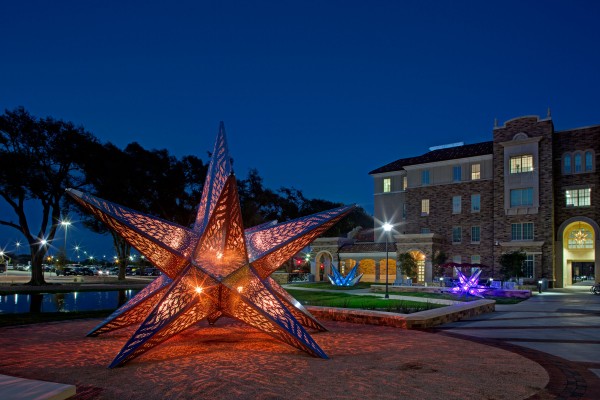 Each star’s facets have cut-out patterns. Behind the patterns, LED light radiates. The patterns celebrate Tech’s values, culture, history and traditions. Their subject matter ranges from moments like homecoming and pep rallies to day-in-a-life West Texas realities as windmills and wind gusts. Even the LED lighting evokes the annual Carol of Lights. As part of their homework, O’Connell and Hancock spoke with students about what Texas Tech means to them. Inspired by the feedback, the artists embedded well-known symbols in each star. “We’re sort of spelling out the myths of the university,” says O’Connell.

Another great use of stars as art was found on a recent visit to Rhodes College in Memphis, TN. The Apse Reading Room in the Barrett Library features a ceiling painted to recreate the position of stars in the night sky on January 1, 1849, the college’s founding date. While the College’s lynx mascot was selected in 1923, the Lynx constellation figured prominently in that 1849 night in the skies over Tennessee and is clearly centered in the room’s ceiling overhead. A mysterious foreshadowing of what was to be? Perhaps, although then president Dr. Charles Diehl chose the Lynx because he felt its ferocious and scrappy qualities befitted an emerging institution on the frontier.

What myths figure prominently in the lore of your institution? How could design celebrate those stories and inspire new ones?