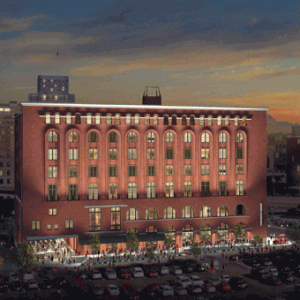 After a 24-year stint at the Mackey Mitchell-designed Power House just south of St. Louis Union Station, the firm  has signed a lease and will be moving to the historic Cupples 9 building at 914 Spruce Street  located one block west of Busch Stadium. The 117-year-old building, listed on the National Park Service Historic Registry is being redeveloped, leased, and managed by the Koman Group.  The firm will be leasing approximately 11,000SF of space on the fifth floor with an anticipated move-in date of December 1, 2012. The staff will be working in a space that is modern yet maintains the buidling’s historic character with 12′-high ceilings, large windows, exposed brick walls, and massive exposed Douglas Fir columns and beams. Plans are to adopt a new bench-style seating arrangement which will support Mackey Mitchell’s culture of creativity, open communication,  and collaboration.

President Dan Mitchell says, “”We’ve had a long and meaningful history with downtown St. Louis and it’s exciting to re-connect with the city in a space that will reflect our company’s vibrant culture.”  Founded in 1968 by Gene Mackey, the firm’s first office was located in the Railway Exchange Building (formerly Famous Barr). During the first 25 years of the firm’s history, Mackey was involved in the renovation and preservation of many of St. Louis’s historic landmark buildings – including a movement to save the Cupples Buildings.

Mackey Mitchell’s history with Cupples dates back to 1989 when the Civic Center  Corporation proposed demolishing the buildings to provide parking for a new sports arena. The plan was vetoed by then-mayor Vincent Schoemehl Jr. until a study was developed to determine the property’s potential use.  Mackey Mitchell, in collaboration with Halcyon Ltd (Hartford CT), was selected to perform the comprehensive study for an urban development program.  Along with work on the study, Gene Mackey served as an ardent spokesperson for saving the elegant warehouse buildings.

Built in 1894, Cupples 9 has a fascinating history as one of the first urban master-planned manufacturing and warehouse districts in the United States. The district was conceived by Robert S. Brookings and Samuel Cupples in the 1890’s and totaled 24 structures.  From the nine remaining buidlings that once comprised Cupples Station, Cupples 9 is the eighth original structure to be redeveloped.

The move reflects the firm’s desire to promote teamwork and collaboration.  Over the years Mackey Mitchell has received numerous awards for its people-oriented culture and client service. In May of 2010, Architect Magazine ranked Mackey Mitchell as one of the nation’s Top 100 Firms based on profitability, quality of its designs and commitment to sustainability. According to Mitchell, “In this survey we were compared with firms from all over the country…giants in Chicago with revenues of $300 million, and employees numbering a thousand.  We feel we held our own by making the magazine’s coveted list.”