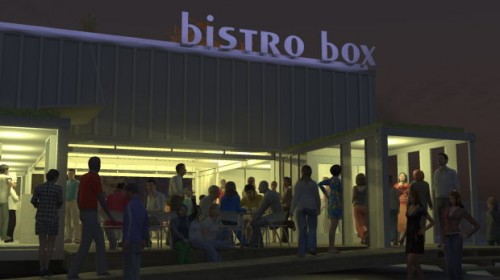 Bistro Box is one of four winning ideas in the Sustainable Land Lab Competition, a partnership program between the City of St. Louis and Washington University in St. Louis. The challenge was to put vacant land to good, sustainable use. The idea was conceived by Mackey Mitchell architect and principal John Burse who teamed with landscape architect Jim Fetterman and chef Ben Poremba to conceive and submit the winning idea. Although Ben is no longer involved, chef Clint Whittemore is now serving as a consultant.  The Bistro Box will be built from used shipping containers and run by a rotation of guest chefs.  Winners receive $5,000 in seed money and a two-year land lease. Burse says the team is actively seeking investors and plans to launch a Kickstarter campaign in the next week to secure additional funding. In the meantime, those interested can follow the project’s progress on the Bistro Box’s Facebook page. Congrats to a winning team!